The best fixie bikes under £1000 are popular due to their simple design and easy to maintain mechanism. Only essential elements are mounted on the frame. The fewer parts there are, the fewer malfunctions can occur. However, there are few things that have to be considered before buying any type of a bike including a fixie bike.

The fixed gear mechanism dates back to the time when the first bicycle was constructed.

The best fixed gear bikes under £1000 can be equipped with a flip-flop hub, which means you will ride your bike either as a fixed-gear or a single-speed with a freewheel. Being able to switch between fixed gear and single speed was a rarity a decade ago. Today it almost comes as a standard feature on all single-speed bikes.

A single/fixed gear bike should be very light weight due to the specific components selected. It should have high quality wheels for comfort while commuting and to keep you firmly on the road at all times.

Some say the purest form of cycling is achieved using a single speed or fixed gear bicycle. The bike and you are in perfect harmony with each other. No fancy components or overcomplicated gadgets. Just you, the bike and the open road.

Single speed and fixed gear bikes usually have shorter crank lengths than standard bikes. This is because you'll be pedalling faster and most constantly. Shorter cranks are much easier on your knees and so you'll be able to keep up this physical exertion for longer. Another reason is with a fixed gear bike you'll need to pedal even while going around corners. Having a shorter crank allows you to lean the bike without striking the pedal on the floor.

Build Your Own Best Fixed Gear Bikes Under £1000

Fixed gear and single speed bikes usually arrive with some construction being required to get your road worthy. Luckily fixed gear and single speed bikes are a lot of fun to build. Partially because of how simply their design is. You can easily build the best fixed gear bikes under £1000 within a few hours, give or take a few breaks. Some fixie bike companies actually only provide you with components. It's a sort of 'pick & mix' so you can create your dream bike and build it yourself.

Regardless of whether you prefer a drop-bar or flat bar bike, single speed bikes or fixed gear bikes, aluminium frame or carbon fiber frame, you can find a bike with most or all of these features for less than £1000.

When it comes it simple cycling, the fixed gear and single speed models are the first and last place you need to look. No shift cables, gears, complex braking systems or heavy suspensions. At worst you'll have a small flip-flop hub to deal with. By locking the drive train to the rear wheel, great acceleration can be achieved while keeping the overall weight of the bike down.

The best fixed geared bikes under £1000 have become overwhelmingly popular in recent years. They are different because of the way the cogs are connected directly to the pedals motion. It's usual for the back wheels to have a small gear attached to them. The bike’s chain attaches to the teeth, which rotates the chain. As compared to the other all-terrain bikes , fixed gear bikes are often lighter and can cost a lot less. This combination makes them quite appealing to those who live in cities or places where they need to carry their bike up and down stairs etc.

Single speed bikes you much higher manoeuvrability, and a more satisfying riding experience since the drivetrains allows you to transfer more power efficiently to the wheels. This increased efficiency means that you end up using less energy to travel over long distances.

The fixie bikes with gears also offer the advantage of simplicity. The natural design of the bike makes it a single-speed bike. The challenge being finding the fixie bike with gears that best serves your needs for under £1000. 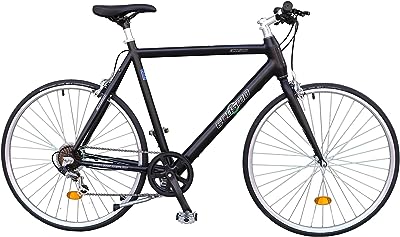 This Fixed Gear bike is built with a handcrafted, chrome-moly frame and fork. The quality lightweight alloy frame has high tensile strength, while remaining light and strong.

The Ecosmo 700C Fixed Gear Road Bike is part of the ECOSMO series of bicycles. The handcrafted ECOSMO 700C Fixed Gear Road Bike is a high-quality, versatile bike designed for city riding. The bike featuring a comfortable, upright riding position. A quick release wheel for convenient commuting and 7 speeds for going fast across town. This bike is ideal for urban living. The single-speed bike is also ideal for off-roading, commuting and track racing.

As a high-performance bike, the 700C Fixed Gear Road Bike offers everything you need for a smooth, fast ride. Including a lightweight, durable chromoly frame with a solid build that can take years of riding. It is one of the most affordable fixed gear bikes on the market. Yet don't let its price fool you. The solid, straight-gauge aluminium frame, handlebar and fork ensure excellent ride quality and durability. The standard set of parts complement the frame perfectly. Making for an extremely solid, responsive and fun ride. The ECOSMO 700C Fixed Gear Road Bike is perfect for urban commuting, running errands, or cruising around the neighbourhood.

The ECOSMO Fixed Gear Road Bike is a great bike for beginners. It's easy to assemble and the frame is made from a high-quality aluminium that ensures strength and durability. The bike is a single speed fixed gear bike. 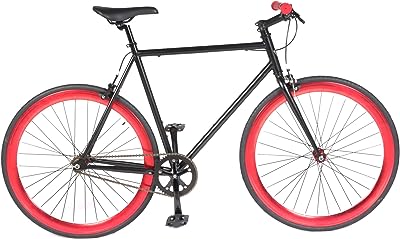 Highly recommended for anyone looking for a low maintenance, high quality bike.

This bike is eye catching to say the least. The Vilano Rampage’s frame is jet black as is every component of this bike. The frame comes in at 12.5kg (large version is 15kg) and is designed to eat up the miles. As stated earlier the whole bike is coloured black and looks great. The handle bars aren’t as curved and ergonomic as some of the others available however they are just as comfortable and easy to use. The wheels on this bike are impressive, presented in black and seem strong and durable. The Vilano Rampage Black comes with urban platform pedals as standard. The saddle is perhaps a little on the hard side however remains comfortable and easily adjusted for rider preference. The Vilano Rampage road bike comes with a rear flip-flop hub containing a freewheel and cog, allowing the rider to quickly change from a single speed to a fixed gear by flipping the rear wheel. This is well reviewed and we agree is a very nice feature of the bike.

The brakes do need a little adjustment initially however perform well once corrected. The pads are quite tough and plastic like however can be easily upgraded if you’re unhappy with them. For the price the brakes are more than sufficient and respond well when engaged.

The tyres are brilliant on this model. If regularly kept at a steady pressure they’ll last a long time. Some choose to upgrade things like tyres and brakes immediately however with the tyres provided with the Vilano Rampage road bike this is not necessary.

The bike rides really smoothly and although the seat is a little on the hard side, the experience of riding this bike on the whole is positive.

Hugely recommended bike to anyone looking for a low maintenance, high quality bike. The price for a brand new bike like this is impressively low and therefore offers huge value for money. The bike comes with somewhat budget components which is perfectly understandable for the cost of the bike. These can be upgraded if and when you choose, offering the rider with the ability to enjoy the bike immediately and improve their experience over time with component by component upgrades. This bike is very good and we hugely recommend you consider the Vilano Rampage road bike when looking for your next road bike.