A new era of cycling has begun. The best electric bikes under £750, are becoming increasingly popular as their design evolves to produce ever lighter models. Its thought that in the not-too-distant future, everyone will have one. Electric bicycles are fitted with an electric motor that can be used as a boost of power when cycling up hills or your legs are feeling the effects of a long ride. EU law does not permit electric bikes to purely rely on their brushless motor, so you usually have to pedal as well. The extra power a brushless motor can bring opens up the world of cycling to many who wouldnt otherwise try it. You can ride faster, further and for longer with the back-up of that little electric motor!

When you ride an electric bike under £750, it is virtually silent, so it doesn't disturb the ride. The beauty of e-bikes is that they make the joy of cycling accessible to so many people in so many ways.

Electric Bikes Are Great For Commuting

E-bikes under £750 come into their own when you want to start commuting on two wheels, say, but feel your 30 miles round trip journey is just that bit too long or strenuous. Assisted pedalling means less exertion and less chance of arriving at work dripping in sweat. There’s some evidence that e-bike owners cycle more, so even if it’s not as good a workout as a regular bike, it’s certainly better than nothing. E-bikes are heavier than regular ones, often 7kg extra or more. So, if the battery goes flat, then you are pedalling a heavy bike.

It's worth noting that some of these bikes have very impressive single charge ranges. So the likelihood of you running the battery dry is low unless you've got a very impressive journey ahead of you. The battery and motor combination is worth the additional weight and offer great value for money. E-bikes are also pricier than those that thrive on push power alone.

An electric bike has to have all features a great common bike has and a battery with astounding battery life and electric front hub motor that is powerful enough to make a huge difference.

Having An Electric Bike Is Not Considered Cheating

Attitudes to electric bikes under £750 have changed in recent years. For a long time they were seen by cyclists as 'cheating' and by non-cyclists as being just like a bike, but uglier and far more expensive. This new breed of best-in-class electric bikes feel more natural, look more normal, weigh far less and people are coming around to the idea that a ride with the convenience of a bike but without all the sweat and effort is a good thing.

For a commuter, they're ideal. While you still feel you've done exercise, the assistance means you won't arrive at work in a hot and sweaty state. The power boost whenever you start from a standing position is ideal for a speedy getaway at a traffic light with buses and lorries right behind you. And you'll get a nice ego boost every time you effortlessly ride past a struggling regular cyclist.

Electric Bikes Can Improve The Health Of You And The Planet

E-bikes under £750 are only going to get more popular as people try to reduce their carbon footprints, save money, and get a little fitter. Electric bicycles offer the same great benefits as traditional bicycles and remove many of the roadblocks and challenges that people face with traditional pedal-powered bikes. With help of an electric brushless motor you can get where you need to be faster, climb hills effortlessly and significantly reduce your carbon footprint. Electric Bikes are Eco friendly and green, by purchasing and using one, instead of your car, you're helping the environment.

E-bikes are a fantastic route into cycling for beginners, or for those returning to cycling, as they provide a helping hand when it comes to conquering physical fitness challenges.

Since electric bikes come in a number of different varieties, working out which one is the best is tricky. We've picked our favourite for less than £750. Hope you find one that suits you! 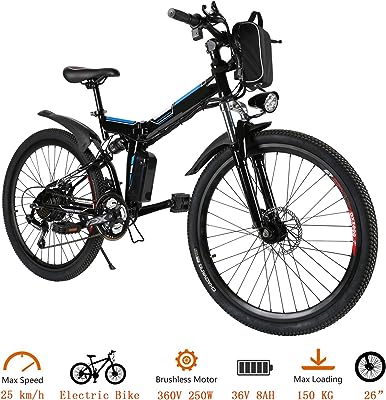 Made for adventure travel and urban commuting, the Oppikle is a light, foldable, electric mountain bike. It steers quickly and easily, glides over cracks in the pavement and is a breeze to store when not in use.

The Oppikle electric mountain bike is perfect for exploring new trails and taking on challenging terrain. It's rugged enough to take on the harshest of terrains, but also powerful enough to help you get up those steep hills with ease.

Oppikle is a unique folding electric mountain bike that makes it easy to travel with your bike. The durable aluminium frame is strong enough to support the rider and the bike can be folded easily for storage or transport. It is a bike that comes with mechanical disc brakes for reliable all-weather stopping power, and suspension fork for better shock absorption.

The Oppikle has both front and rear suspension, which provide comfort while riding, as well as a powerful 250 watt rear hub motor for hills. The 8AH battery charges in 4-6 hours and can last approximately 15-30 miles on a single charge. The bike is capable of speeds of up to 16mph so you really can get where you need to be quickly.

Besides all of these features, the Oppikle is a sturdy, light-weight aluminum frame electric mountain bike that folds up in seconds! 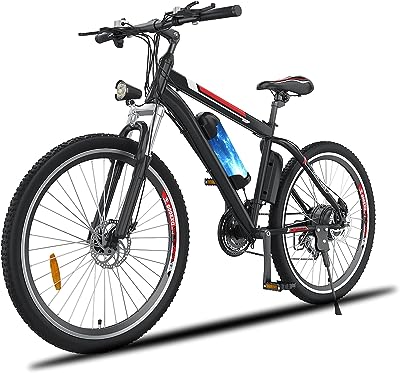 The Oppikle electric mountain bike has front and rear disc brakes. It is a new and innovative design that is perfect for the adventurous generation.

The Oppikle electric mountain bike is a lightweight and stable bike. The aluminium frame makes it very light and the bike is still stable. It is a good choice for mountain biking. The Oppikle has a fantastic battery capacity. It can be used for a range of 15-30 miles. It is a two-wheeler that is be powered by a 250W brushless motor. It can easily reach 18mph.

The Oppikle electric mountain bike is a great way to spend a day, whether you're exploring or venturing into town. It can be recharged just by plugging it into a standard plug socket. It takes 4-6 hours to charge the battery. 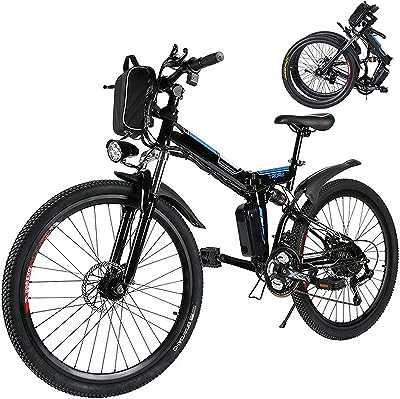 The Eloklem E-bike has a powerful 250W motor. With a frame built from lightweight alloy and a suspension fork with hydraulic damper, it will glide effortlessly over any terrain.

The Eloklem E-bike is a full suspension electric mountain bike that is designed to be highly maneuverable, lightweight, and also extremely affordable. The bike will take you up any hill and will provide you with the speed and power you need to get you where you want to go.

Unlike many other electric mountain bikes on the market, Eloklem is made with a full suspension design. Which makes it easier to navigate tough terrains and overall offers a more comfortable ride.

The Eloklem is a fully electric mountain bike designed for all types of riding. From commuting to the office to climbing mountains. The Eloklem will turn heads and amaze onlookers. The powerful hub motor in the rear wheel is hidden by the rear hub and is powered by a 8000 mAh rechargeable battery. The battery is easily charged by plugging it into a wall outlet.

A powerful but lightweight motor, integrated into the inner bracket. Delivers smooth, seamless power to the bike's rear wheel via the chain. Eliminating the need for a chainretensioner or any other kind of derailleur. The powerful Bafang motor can also be operated as a regular pedal-assist to help you climb hills or pedal faster with less effort.

A premium suspension fork is built into the frame for increased comfort on rough terrain. The Shimano 21 speed transmission system and powerful disc brakes ensure that you can handle any surface or trail. The E-bike also comes with an LED headlight and loud horn.
Overall, this foldable electric mountain bike is the perfect choice for people who are looking for a durable and efficient bike that can be used both on the road and off it.