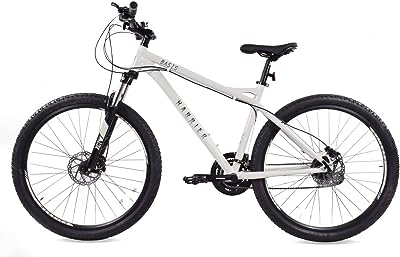 See The Latest Price On Amazon

The Basis Harrier Hydro bats for the next level in Mountain Bike riding. Based around a T6 Hydroformed hardtail frame, offering a more aggressive stance thanks to it's lower standover, designed to allow for in-air agility and really exaggerate maneuverability. Working in harmony with this downhill geometry you'll find uprated SR Suntour XCT-HLO Hydro Lock-Out suspension forks, with 100mm travel you'll confidenty glide over unforgiving terrain and make childs play of tough impact.

Excelling on the descents, propelling on the ascents. While thriving off pace on the way down, the Harrier Hydro has no qualms in reaching the summit without breaking a sweat. We've combined a broad 24 speed Shimano Altus gearing system & Rapidfire+ shifters to endure the steepest, most relentless terrains so you can save your energy for the way down. Of course with aggressive velocity must come aggressive stopping power, and when it comes to high-end MTB's we know that brakes serve much more of a purpose than simply slowing, so we've encorporated powerful Shimano BR-M315 Hydraulic disc brakes to aspire agility when cornering, and confidence when slowing.

A nice addition to the Basis range, the Harrier Hydro hardtail mountain bike looks the part. From the look of the specs and customer reviews, it has the performance to back it up.

The Basis Harrier Hydro Has Featured In The Following Guides...