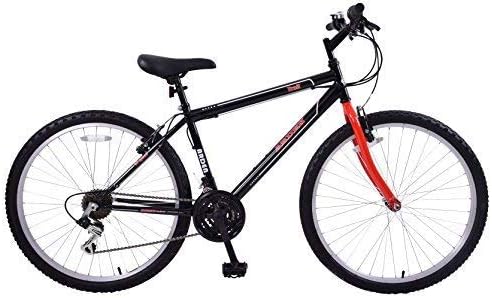 The Arden Trail mountain bike has a classic road bike look about it.
Buy From Amazon.co.uk

When we saw the price of the Arden Trail Mountain Bike we thought it was a mistake, however assurances were given that this bike is aimed at the budget market and the price is correct. The bike is no thrills however for the price it’s nothing less than you’d expect. We’ve seen some previous buyers suggest getting a service done just to be sure the setup is correct. Even if you decided to upgrade the seat, pedals and tyres this bike would still come out far cheaper than some of the podium position options mentioned above. If budget is your priority then this bike is well worth a look.

The Arden Trail mountain bike has a classic road bike look about it. It’s simple, sleek design is complemented by it’s vivid red fork. The bulk of the bikes frame is black, matching the saddle, handlebars, gear system and pedals. Honestly I don’t think you can go wrong with black, it looks professional and will allow reflective plates to be as visible as possible throughout the day and night.

The bikes frame is made of hi-tensile steel, it’s strong enough to take a beating off road yet as mentioned above has a minimal, classic look to it. The handlebars are straight and quite comfortable, the bike even comes with a bell for those of you planning on politely passing pedestrians. The handlebars are equipped with easy to use twist grip gear levers  as well as standard brake levers. The gear system of choice on the Arden Trail mountain bike is a 21 speed Shimano one. This is enhanced with a rear Shimano dereailleur system for improved shifting.

The brakes used on the Arden Trail mountain bike are v-type brakes at the front and rear, they’re powerful brakes and more than fit the bill when it comes to stopping the bike quickly and safely. It’s difficult to tell without testing the bike over several months but the pads seem pretty good on the brakes so no concerns there.

The mountain bike comes with lightweight alloy wheels and an ‘in the middle’ tyre, the tread is good enough for off road cycling but still quite suitable for long journeys on smoother surfaces. The main concern with this bike is simply the fact it doesn’t have a suspension system like many other mountain bikes do, however the tyres do dampen a lot of the impact while off road so it’s not really an issue unless you’re giving the bike a real beating.

This bike is very well received online and has a large amount of reviews, feel free to check the price via the button on this page for more information.